NTSB investigation into fatal AS350 accident

Looking for somewhere to post an unusual question? Got something that doesn't fit anywhere else? Do it here...
Post Reply
9 posts • Page 1 of 1

NTSB investigation into fatal AS350 accident

Okay, its an American accident involving an AS350 in an EMS role and not very common here in Australia, but some interesting learning points to come out of it anyway. It is also good to hear that although the pilot was a contributing factor, the blame is shared between manufacturer and operator.
For those who like to bash Robbbies for their post crash fire, take note.

Fatal Flight for Life.
What you leave behind is not what is engraved in stone monuments, but what is woven into the lives of others.
Top

There was a very good detailed article about the conclusions of this report on Vertical:

Lude wrote:There was a very good detailed article about the conclusions of this report on Vertical:

That article was a good read. What has me confused is that it says if the hyds aren't turned on/ recharged after the test the pedals need excessive force to move them. Wouldn't you notice that as you're pulling collective to lift? And therefore stop lifting?
There is more than one case where the take off has been continued in this state. Are guys just yanking the bird off the ground and realising too late? Or is there residual pressure in the system that lets them get in the air before it locks out?

Does anyone have the data on pedal forces required during HYD fail?

I am not overly familiar with the design changes of the 350 tail blade over the years but as a stab in the dark I would suggest as the new models came out the trailing edge was extended further back (to increase blade surface area, deflection and tail authority) the CP would have moved further rearwards away from the centre of pivot (the shaft) which means the blade has a tendency to always return to its happy spot (neutral) call it windmilling of forces or self governing if you will

Now adding counter weights ahead of the shaft will counter this force by bringing the CP back closer to the pivot. This is exactly what Airbus tried to do when they took over Euro-choppy chopter but could not be incorporated into the current design, I think due to the higher centrifugal forces on the design from the counter weights (this is my guess so don't quote me)

To illustrate how this theory in practice, In the picture below you see a tail shaft assembly from a Rotorway, you will notice the small shaft and bolt with washers that comes out of the blade grip and the weight is positioned ahead of the shaft towards the leading edge (i.e. in front of the blade pivot point.) In this setup adding weight reduces pedal force required and decreasing the counter weight increases pedal force required

If the CP is is bang over or in front of the pivot point you have the tail wagging the dog effect, kind of like a 3 ton trailer being towed by a 1 ton car breaking going down a hill, or in the case of the 350 the tail is so big that the dog cant wag it without a little help 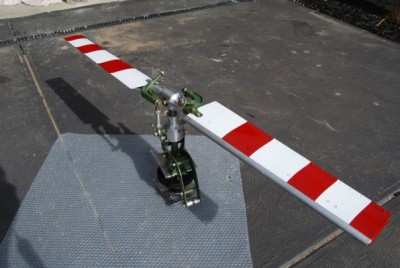 Well from the arm chair perspective yes a new tail blade design with a re positioned shaft could in round terms theoretically do away with the hydraulics, of course if it was as simple as it sounds it would have been done many many years ago, component re certification, flight testing and then who knows what the knock on component effects are, perhaps it was already tested and caused stability or vibration issues in certain wind conditions etc etc etc who knows. I am sure people way smarter than all of us combined have already looked into this

Adding the flashy light retrofit kit seems to be a logical fix IMHO, maybe they can make it a female voice over the intercom, that way pilots would really listen

SIR_SMP wrote:of course if it was as simple as it sounds it would have been done many many years ago

A bit like fitting fuel bladders to prevent post-crash fires.

I'm sure we are all acutely aware at how little airframe manufacturers want to do to actually improve flight characteristics and safety. As a whole, they want to pump out the least amount of airframe for the most amount of $$$, and get as many out the door as possible. An example of this is the B3e. Airbus owned that thing, they were going to stop producing the B3 anyway, and by doing that were funnelling all current B3 operators into a cone of either overhauling old airframes (and the $$$ involved with dealing with 'z Fronch) or paying what they had to to climb inside an "e". Airbus could have spent the money doing the work, research, add some actual tangible value to the "e" tag the old girl was getting.
Nope.
Bell is doing the same with killing the 206 Short (Jetbox...not the Longbox) and replacing (

) it with the 505. Booo, hisss, raghhhh! Could have made a real greaseless mini 407 rotor system, would have been able to update the airframe completely, should have looked at all the advances (despite the crashing) from the 525 development. Could'a, would'a, should'a...didn't.
We get a mixed bag of multi-contenential parts that will probably lead to a massive lawsuit when the first transmission in the 505 (mounted at passenger HEAD LEVEL) comes ripping through the cabin if somebody rolls left on impact.
So...tangental rant aside.
My take on the report are the following points.
-You as a pilot are responsible for your actions.
-A large company will always try cover its bum if you crash.
-Know your airframe.
-"It's better to be on the ground, wishing you were flying, than the other way around."
-EMS airframes are too heavy.

The majority of TRB have no washout and as the chord and airfoil is constant along the length of the blade it creates more lift at the tip than the root. Simply because the tip has a higher airspeed. It also takes more power as the TR is not efficient aerodynamically. Far simpler to just make a straight inefficient blade than twisted ones.

Large aerodynamic forces occur on the blade and then the only way around it is hydraulics.

If the blade had washout the stresses and therefore the power required to move it would be less. It could almost be compared to mass balancing on a aircraft control surfaces.

Good examples are fenestrons which have twist and are more efficient, they are also shrouded and have less tip drag on the blades.

Regards,
'Mankind has a perfect record in aviation - we have never left one up there!'
Top
Post Reply
9 posts • Page 1 of 1

Return to “The Pilots Lounge”

Users browsing this forum: No registered users and 1 guest